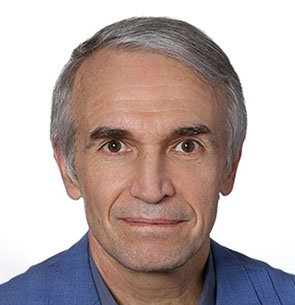 He was born in Moscow on March 19, 1956. In 1978 he graduated with honors from the chemical faculty of Lomonosov Moscow State University. From 1978 to 1991 he work at the chemical faculty of the Moscow State University (graduate student, junior research assistant, assistant and assistant professor). Professor (since 1995), Correspondent member of Russian Academy of Sciences (since 2006).
Since April 1997, he worked at the Russian Foundation for Basic Research as the head of the department of chemistry, and from December 1997 to 2009 – the executive secretary of the RFBR. Since 2007 until now – head of the Laboratory of the Ionics of Functional Materials of Kurnakov Institute of General and Inorganic Chemistry of Russian Academy of Sciences. Since 2010 until now – head of Laboratory of Membrane Catalysis of Nesmeyanov institute of Petrochemical Synthesis of Russian Academy of Sciences. The head of the department of inorganic chemistry of the Higher Chemical College of Russian Academy of Sciences and the deputy head of the department of fundamental bases of chemistry of the Chemical department of Lomonosov Moscow State University. He is a member of the editorial boards of the journals “Inorganic Materials”, “Electrochemistry”, “Electrochemical Energy” and Deputy Editor-in-Chief of the journals “Membranes and Membrane Technologies” and ” Nanotechnologies in Russia”. He was chairman of the organizing committee of a number of all-Russian and international conferences. Awarded with medals named after N.T. Kishkin and him. N.N. Semenov, the government’s prize in the field of education.